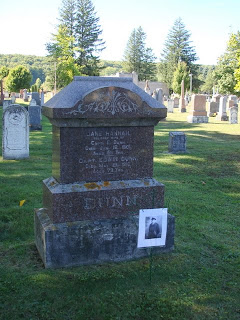 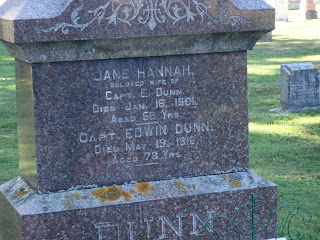 Captain Edwin Dunn was born in Birmingham, England. His father was Paul Dunn. His mother's first name was Sarah. In Edwin's death registration his mother is given as ? Dugard, but his mother name is given as Sarah Giles in his marriage registration.

In the 1851/2 census, the family is living in Sydenham Township with Edwin being 14 years old.

Jane was the daughter of Samuel Hannah and Jane McClements. Edwin and Jane "Jennie" were married in Owen Sound on 11 January 1871.

This marker was photographed during the tour of Greenwood Cemetery in September put on by Owen Sound Marine Rail Museum
Posted by Janet Iles at 7:56 AM

Hi Janet, wondering if you can help me. I have had no luck in locating a tombstone or gravesite of my GGGGrandfather, James Stapleton. He died in 1856, Clinton, Ontario. Nothing has turned up in Huron County, but knowing this is relatively close to Stratford and Stratford is now part of Grey County that maybe I need to look in this direction. It could be no grave even exists. I just thought with your knowledge of the area you might be able to offer some advice.

Lynn - Stratford is in Perth County. James may not have had a tombstone so it would not been listed in transcriptions, or the stone was so faded to be unreadable that it wasn't transcribed. With the early date the records for any burials may not have survived. Have you checked whether there any burial records for the cemetery still in existence? Do you know his religion? Perhaps there are church records in an archives.