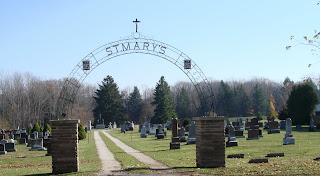 It is affiliated with St. Mary of the Assumption and the Missions Parish, Owen Sound.

Most days, I pass by this cemetery at least twice. From the gates, you see this imposing monument straight ahead. 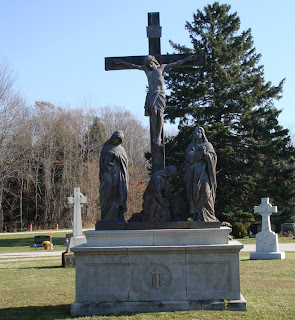 While researching another topic, I found information on the dedication of this memorial. The following is transcribed from the Owen Sound Advertiser 2 September 1918 p.1

A large crowd attended the ceremony Sunday afternoon of the dedication of a memorial erected at St. Mary's Cemetery in memory of Rev. F. X. Granottier, who for fifty-four years was the beloved pastor of the Church here. The ceremony throughout was one of the most solemn and impressive that has taken place in Owen Sound. Commencing with a short service of dedication and blessing of the memorial, the officiating priests, Fathers Finnegan, Murphy, Sharpe, McNulty and Roach, proceeded from the cemetery gate to the oval in the centre, chanting the Mass of the Stations of the cross, Father Roach conducting the service. At the oval where the memorial is placed, Father Powell delivered an eloquent and impressive address on the divinity of the Christ.

The memorial, which is placed in the Oval, where the remains of Father Granottier lie, is one worthy of the man in whose memory it is erected. The base is of grey stone, very plain in design, and bears on its face in the centre the monogram I.H.S. On the copestone in the inscription "In Memory of Rev. F. X. Granottier" and on the same face, and flanking the central design, the words "Born at Val Fleury France, October 7, 1836. Ordained 1852. Labored in the Owen Sound Missions 1863-1917. Died March 2, 1917." And at the foot, "Requiescat in Pace" In the centre is placed a large bronze crucifix, flanked by bronze figures, the whole forming a striking group. The whole is a most beautiful composition and a decided ornament in the cemetery. It is the gift of a large number of the members of the churches here and in the vicinity , where Father Granottier spent so many years of labor, and where his influence will still be felt for many years to come. 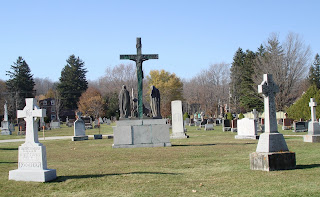 The view from behind facing the road.

What do Cemeteries Teach us about Cultural History - upcoming talk

Ken Turner will speak about "What Cemeteries Teach Us about Cultural History" at the August 25 meeting of the Bruce Grey Branch of the Ontario Genealogical Society. The meeting will be held at Frank Street Baptist Church in Wiarton, Ontario.

There is a business meeting prior to the talk. Everyone is welcome to attend.

As a graveyard rabbit, I look forward to his talk.
Posted by Janet Iles at 3:37 PM 0 comments 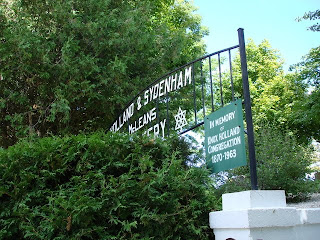 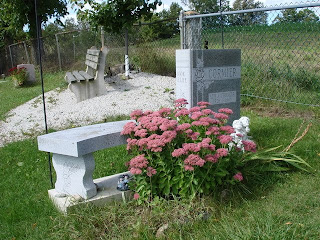 on side - Book of Life

buried in McLeans Cemetery on Holland - Sydenham line in Grey County, Ontario. It is a beautiful country cemetery.
Posted by Janet Iles at 10:07 AM 1 comments