In Greenwood Cemetery, Owen Sound, I found this monument as I strolled through the cemetery on a mission to find military memorials back in November 2009. 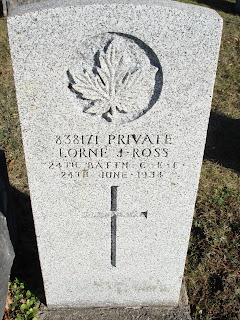 Lorne had served in the First World War but he did return home after the War but his health was affected by his time overseas. A search on Ancestry, led me to Canada, War Graves Registers: Circumstances of Casualty, 1914-1948 Record [database] for Lorne J Ross. It provided a link to the digital image of the form. Lorne's early death at the age of 36 was attributed to his service. He died in Christie St. Hospital in Toronto, Ontario  where he had been a patient for seven weeks according to his death registration. Lorne was single and had worked as a civil servant. He was working as a waiter when he enlisted in December 1915.  He gave his birth as a year earlier than it actually was, as did many young men did when they enlisted. Lornton John  Ross was born 21 June 1898 to  John Ross and Margaret Jane Hammond of Owen Sound.
Posted by Janet Iles at 11:00 AM 0 comments