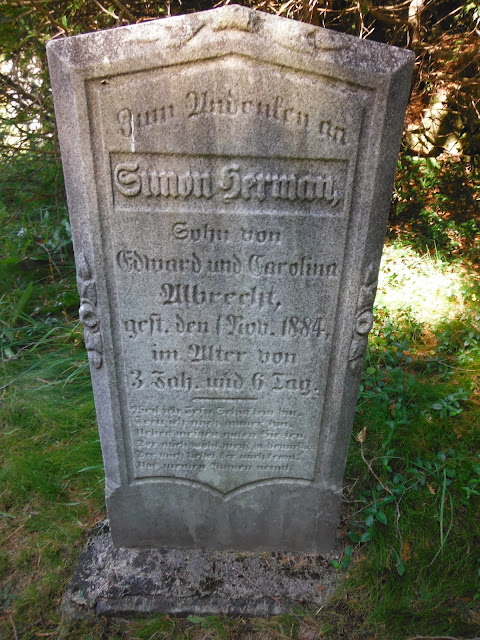 In his birth and death registrations, his name is anglicised as Simon Herman Albright.

Simon was born 25 October 1881 to Edward Albright and Caroline Brightfield lot 21, concession 6. [1]
He died of diphtheria 31 October / 1 November 1884. Both his stone and his death registration give his age at death as 3 years 6 days. [2] Four other children, with the same registration date, also died of diphtheria.

Simon never was listed on a census, nor is he listed in the short section in the History of Sullivan Vol. II, p 30-31 "Albright Family"
Includes a photo of Edward Albright and his wife Caroline Breitfeldt

Edward was born about 1844 in Germany. He and his wife lived at pt lot 20, concession 6 of Sullivan Township. The book mentions Frederick who was born the year Simon died (6 March 1884).

Thanks to my sister for translating the text. Unfortunately, the writing at the bottom of the stone is not clear and not large enough. Perhaps, I will pay another visit to this cemetery.