Sometimes my client research takes me to Bruce County cemeteries. In the spring, I visited Port Elgin Cemetery where my attention was caught by this monument because of the details provided. 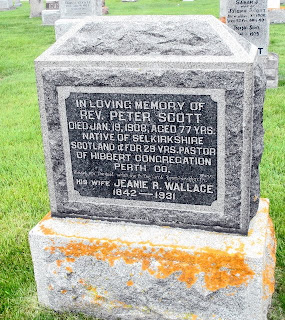 In loving memory of
Rev. Peter Scott
died Jan. 19, 1908 aged 77 years
Native of Selkirkshire
Scotland & for 28 years
pastor of Hibbert Congregation
Perth County
Blessed are the dead which die in the Lord from henceforth
His wife Jeanie R. Wallace 1842-1931

For possible descendants or relations of this couple , the details on the monument provide some good information to start the search into the lives of Peter and Jeanie.

Here is what I learned about the couple in addition to what is stated on the stone from some quick research on Ancestry.ca.

Rev. Peter Scott - He died in Paisley, Bruce County, Ontario [1]. The informant was John Scott. There is no indication of a relationship to the deceased.

Question not answered is how did Peter and Jeanie meet? There is a Wallace family enumerated on the same page as the Scott household in Saugeen Township, Bruce County, Ontario. The Peter Scott is a carpenter in 1861 and in 1871 a student. Had he gone into preparing for the ministry? His age is in line with the Peter who is later living in  Hibbert Township . The Scott household has John Wallace but the  wife is Lydia. There is a daughter whose name looks more like Jessie than Jeanie, but could it be her? There is a good chance these are the correct families as other Peter Scotts found in 1861 and in 1871 aren't as good a match.

In 1881, Peter and Jeanie are living in Hibbert, Perth County. Peter is a Presbyterian minister. By 1891, the census shows the addition of a daughter Janet, aged 7 to the family. The 1901 census has Peter aged 70, Jeanie aged 59 and Janet aged 17. It gives Peter's year of immigration as 1860.If this is correct, he should appear on the 1861 census.

Jeanie died 19 February 1931 in Paisley, Ontario. Because the death registration that is available is more recent than Peter's, more information is provided. The informant of her death is Jno. Scott, nephew. [3]