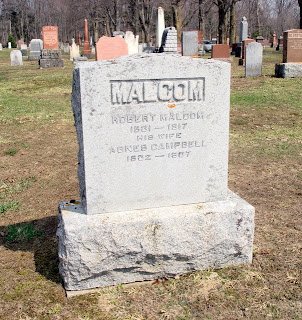 Robert and Agnes Malcom were the paternal grandparents of Allen Beatty Malcom who died during the First World War. For the last several years, I have been researching the men connected with Knox United Church (formerly Presbyterian) who paid the supreme sacrifice during the First World War. The church organ is dedicated in their memory. My goal is to complete the writing before September.

Allen Beatty Malcom's Paternal Grandparents
Robert Malcom was born in Antrim, Ireland on 6 August 1831. Agnes Campbell was born in Ireland in about 1830. They were married in April 1854 in Ireland. [1] The couple came to Canada around 1855. [2] Their son Robert was born in Ontario about 1858. Robert and Agnes Malcom had been active members of Knox Presbyterian Church in Owen Sound before they moved to Winnipeg, Manitoba in 1905. Robert had worked as a building contractor until his retirement in 1899. He served on the town and the county council and on the Board of Works. Robert had been a church elder and for 30 years, he was the Sunday School Superintendent.

Allen’s paternal grandparents, Robert and Agnes were living with their son William and family in Winnipeg in 1906. [3] On 16 June 1907, Agnes died. [4] She is buried in Greenwood Cemetery, Owen Sound. The 1911 census shows Robert living with William and family in Owen Sound. Robert returned to Winnipeg [5] and died there on 14 February 1917 at the home of his son David. He also spent time with a daughter in Vancouver. Robert’s funeral was in Owen Sound and he is buried in Greenwood Cemetery. [6]

Some information about Allen

Allen met his death in the fighting around Lens on the 30 August 1917. He was killed instantly by bursting shell. Allen died just four days before his 19th birthday. [7] Allen is buried in Aix-Noulette Communal Cemetery Extension in the Department of the Pas-de-Calais south of Bethune on the main road to Arras. [8]