Back in May, I posted a photo of the Squire monument at Greenwood Cemetery, Owen Sound. Today's posting is of another side of the monument. 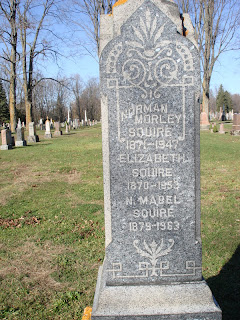 In the 1871 census for Onondaga, Brant County, Norman was only 5 months old. His father Benjamin was 45 and his Mother Elizabeth 23. There is also Mary Anne 15 and Sarah 11. Mary Ann and Sarah were from a previous marriage.

By 1881, the family had grown to include Minnie 8, Edwin 5, Mabel 2 and Daniel 1. They were living in Brooke, Sarawak Township, Grey County, Ontario.

When Benjamin married Elizabeth Hamilton 22 December 1869, he was 44 and she 22. She was not much older than her stepchildren.

Morley Norman Squire, as he is registered, was born 9 November 1870 in Onandaga.

Mabel was registered as Nelly Mable. She was born 6 February 1879 in Onandaga.

Because their death registrations are not yet available, to learn more about these individuals a search for their obituaries may give their exact dates of death.
Posted by Janet Iles at 9:50 AM 0 comments

It is just over two years ago that I went for a Sunday afternoon drive with a friend when we came upon a small roadside cemetery. I insisted that we stop to have a look. 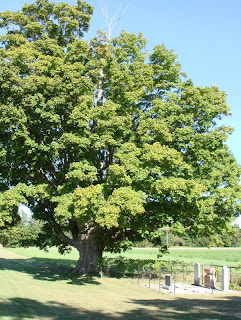 A view of the area from the road. 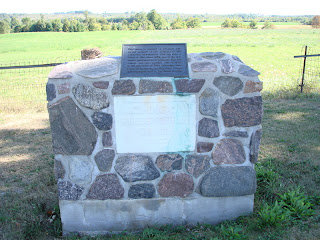 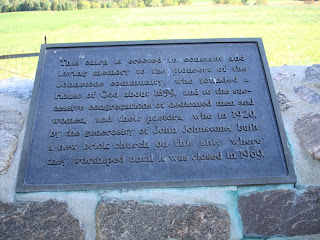 This cairn is erected in constant and
loving memory to the pioneers of the
Johnstone community who found a
House of God about 1859 and to the suc-
cessive congregatons of dedicated men and
women and their pastors, who in 1920,
by the generosity of John Johnstone built
a new brick church on this site, where
they worshiped until it was closed in 1969. 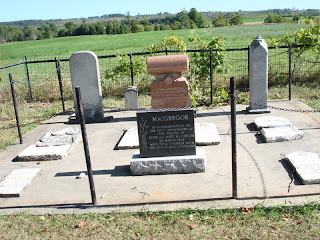 part of the area 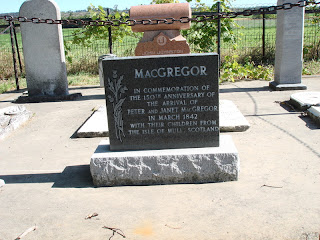 MACGREGOR
In commeration of
the 150th anniversary of
the arrival of
Peter and Janet MacGregor
In March 1842
with their children
from the Isle of Mull, Scotland
I posted some information about the cairn and church in a previous blog article﻿
Posted by Janet Iles at 10:02 AM 0 comments

Over at the Graveyard Rabbit Journal, you can read my most recent article written as the International Rabbit - Paying Homage to Those Who Came Before Us. In the article, I describe a special church service held in the Bethesda Cemetery in Markham, Ontario.
Posted by Janet Iles at 7:18 PM 0 comments 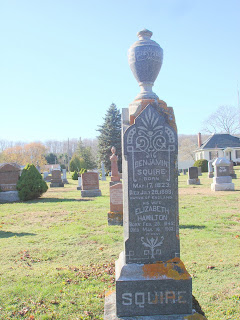 Benjamin
Squire
Born
May 17, 1823
Died July 29, 1899
Native of England
His Wife
Elizabeth
Hamilton
Born February 29, 1848
Died March 18, 1903
At Rest
Some information I have found about them
Benjamin was 44 when he married 22 year old Elizabeth Hamilton on 22 December 1869 in Onondaga, Brant County, Ontario. Benjamin, a miller and widowed, was the son of John and Mary Squire.﻿ Elizabeth was the daughter of Alexander and Jane Hamilton. Elizabeth had been born in Onondaga. [1]
Benjamin was enumerated in the 1851 census with his parents, John and Mary, in the Township of Brant but he is listed as non-resident, a miller, lving in Churchville, County of York.
I didn't find him in 1861.
In the 1871 census, he is enumerated with his wife, Elizabeth and his children - some from his first marriage in Onondaga, North Brant, Ontario. By 1881, they have moved to Brookholm, Sarawak Township, Ontario.
Benjamin Squire, retired miller, died 29 July 1899 in Sarawak Township, County of Grey. [2]
Elizabeth Squire, wife of Benjamin Squire died, according to the death registration, 18 November 1903. She was born in Onendago, Ontario. [3] There is a discrepancy between the information on the tombstone and what is in the death regisration.
[1] Benjamin Squire - Elizabeth Hamilton Ontario marriage registration (22 December 1869); digital image Ancestry.ca (http://www.ancestry.ca/ : accessed 31 May 2011), citing microfilm MS 932, Reel 2, Archives of Ontario, Toronto
[2] Benjamin Squire Ontario death registration #010318 (31 July 1899); digital image, Ancestry.ca (http://www.ancestry.ca/ : accessed 31 May 2011), citing microfilm MS 935, Reel 92, Archives of Ontario, Toronto
[3] Elizabeth Squire Ontario death registration #014093 (23 November 1903); digital image, Ancestry.ca (http://www.ancestry.ca/ : accessed 31 May 2011), citing MS 935, Reel 110
﻿This is not my family. There is information on the other side, which I will show at a later date.
Posted by Janet Iles at 11:27 AM 0 comments

Today's Tombstone Tuesday posting includes winter photos of Greenwood Cemetery. On Sunday, March 13, the snow coated the trees so after church, I took a drive through the cemetery. I stopped and took these photos. 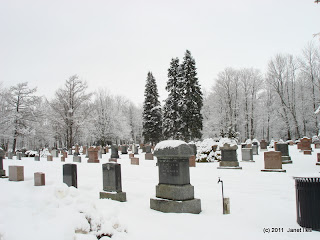 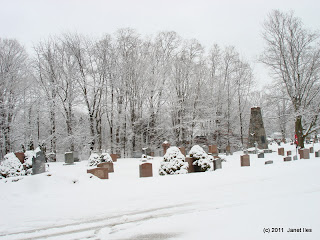 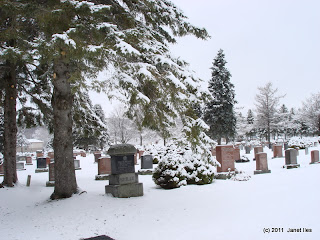 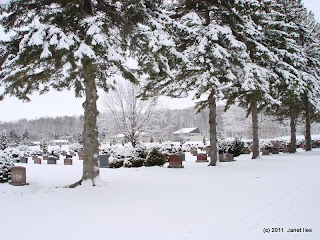 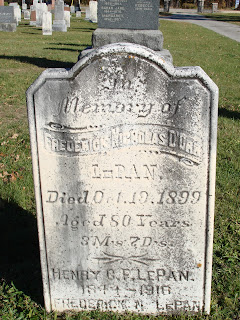