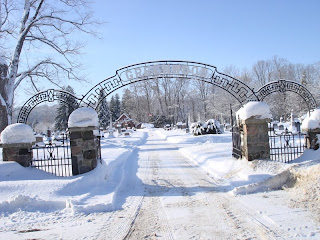 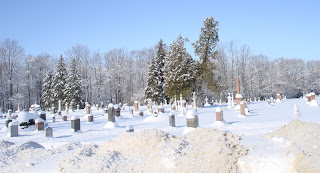 During the winter, the snow covers the graves. The views above are from older sections of the cemetery.

Although it is generally not the custom of people here to visit the cemetery on Christmas Day, people do pause and remember those who are no longer with them to celebrate and try to remember the special Christmases of the past.

A Blessed Christmas to all the readers of Graveyard Rabbit of Grey County, Ontario. 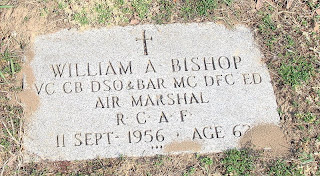 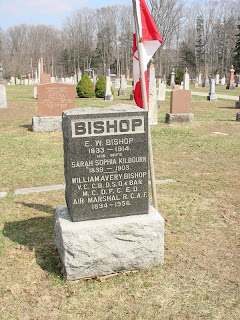 William Avery "Billy" Bishop - Air Marshall of the RCAF has a separate grave marker to the right of the monument. He is also listed on the monument of his grandparents. E. W. (Eleazer Wilson) Bishop (1833-1914) and Sarah Sophia Kilbourn (1839-1903).
William Arthur Bishop (son of Billy Bishop) does not speak highly of his grandfather. E. W.. in the book The Courage of the Early Morning : a son's biography of a famous father.


It was a constant source of wonder that any man as shiftless as Eleazar Wilson Bishop could produce a son as energetic as Will and grandchildren as lively as Billy, Worth and Louie. The only explanation could be that the second and third generations took after Grandmother Sarah Bishop. [1]


The news of the death of Mr. Bishop is received with the genuine regret as he was a gentleman in every sense of the word, loved and respected by all who had the pleasure of his acquaintance. [2]


Eleazer W. Bishop was born in Unionville in 1833 to Avery Bishop and Elizabeth Helmka. He came to Owen Sound in 1853 and he married Sarah Sophia Kilbourn in 1854. His attempts at running a hotel failed. Not content to make practical leather goods, a trade he had learned from his father, his saddlery and leather working shop also went bankrupt. [3] They had three girls and three boys. E. W. died a gentleman at the age of 80 years 10 months, 2 days on 12 January 1914 in Owen Sound. [4]
Sarah Bishop nee Kilbourn sounds like an amazing woman. After her husband's businesses failed, she earned the money to support the family. She did whatever domestic work she could find. Sarah came to Owen Sound in June 1845 when she was only five years old. She died on 2 August 1903 [5] where she was being treated in hospital. Her obituary paints a wonderful picture of her.


Although deeply devoted to her family she had ever an attentive ear and sympathetic heart for the troubles of others and no sorrow which she could alleviate or burden which she could share ever failed to enlist her kindly interest or secure her helping hand. Her charity was of the kind "which vaunteth not herself and is not puffed up." Seeking no publicity, her Dorcas deeds were generally known only to the little wearers of her thoughtful kindness. To her own family her loss will be irreparable, and her memory will be sweet to all who knew her. [6]

Toronto Cemetery in Demuin, Somme France is the location of burials from the First World War. Named for the Toronto Regiment (Canadian 3rd Battalion) in August 1918, Canadians who lost their life in service to their country are buried there.

To see more information about the Toronto Cemetery check First World War cemeteries and the War Graves Commission Site. Check also the Find a Grave Site. Many in this cemetery died on 8 August 1918. One of those buried in this cemetery is my Great Uncle.

To see a companion article go to Janet the Researcher with an article about Harold Edward Iles. See the temporary marker that was placed. These crosses have been replaced with the white stone with the maple leaf.
Posted by Janet Iles at 10:29 AM 0 comments

Recently while reading Amy's Genealogy. etc. blog, I learned something I didn't know. She was writing about cenotaphs.

Question: When is a tombstone not a tombstone? Answer: When it’s a cenotaph. A cenotaph (literally “empty tomb”) is a memorial for someone who is not buried at that place, either because they are buried someplace else or the body could not be recovered. Sometimes the marker will give you a clue that it is a cenotaph rather than a tombstone.


I have always thought that a cenotaph had to be a military memorial. So thanks to Amy, I have have learned something new. I will be on the watch for examples of cenotaphs, not only those that are military memorials to remember a group of people who served their country, when visiting cemeteries.


The following would be a cenotaph to a young man who died in the service of his country -- P.O. Donald Ewart Stiver (4th cousin once removed). 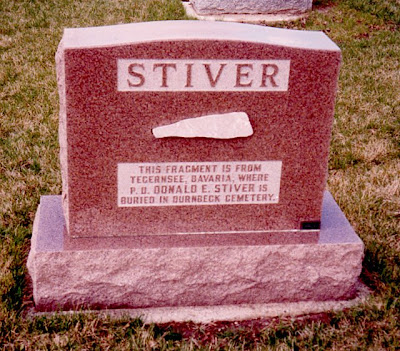 
The Commonwealth War Graves Commission gives his date of death as 6/9/1943. [ September 6, 1943] He was a pilot with the Royal Canadian Air Force the 44th Squadron. He is buried in a Joint grave 2. J. 20-21.
Cemetery: = DURNBACH WAR CEMETERY
On Donald's death registration, his date of birth was given as July 4, 1923. He was presumed dead from air operations. I believe that he was last seen on September 6, 1943 as in a memorial service for George Coathup at Central United Church [Unionville] reported on July 29, 1944, Don Stiver was remembered in prayer as being missing. His name was also read in the Honour Roll of Bethesda Lutheran Church on August 20, 1944. "P.O Don Stiver, the only casualty on the roll, who was reported missing a year ago, was remembered."
Donald Ewart Stiver Ontario death registration #701154 (6 September 1943); digital image Ancestry.ca (www.ancestry.ca : accessed 23 December 2006), citing MS 994 reel 2, Archives of Ontario, Toronto
See a companion article about cenotaphs at Janet the Researcher.
Posted by Janet Iles at 10:23 AM 2 comments

The articles in this blog will focus on the cemeteries of my home county -- Grey County, Ontario. From time to time, I will write about cemeteries where my ancestors are buried outside of the County.

In Grey County, we are very fortunate that the Bruce Grey Branch of the Ontario Genealogical Society has transcribed the monuments/markers/tombstones in the cemeteries of the County. They have also transcribed Bruce County cemeteries. These transcriptions are available for purchase. Contact them for prices and ordering information.

Although I am a member of the Branch and also of the Grey County Historical Society, this is a personal site and any opinions expressed unless otherwise noted are my own.
Posted by Janet Iles at 8:34 PM 0 comments