My dad, known to most by the name Bob was known during the Second World War as "Stubb". He served with the Perth Regiment based out of Stratford,  Ontario. He enlisted on 29 September 1939. He served in Canada, England, Italy and the Netherlands. I am very fortunate to have the scrapbooks that he put together with his ensignia, pay book, certificates and photos. He worked as a cook and a butcher, but he also must have done some work in the medical corps. He also has photos in the album from different Perth Regiment Reunions. 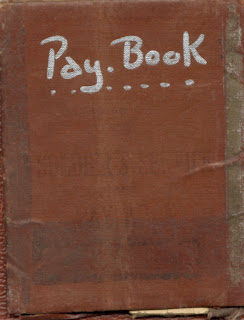 See companion article at Janet the Researcher
Posted by Janet Iles at 5:10 PM

Always nice to learn some history about Gramps and Gram.