The memorial plaque at Knox United Church, Owen Sound, bears the name of two brothers – Charles Haughton McKay Gordon and Thomas Seton Gordon. They were the children of Charles Gordon and Josephine Gimby.


Thomas Seton Gordon is the subject of today's remembrance.


On 22 May 1915, at the age of 25, Thomas joined the Canadian Overseas Expeditionary Force as a private with the 2nd University Company. He was 5 foot 11 inches with fair complexion, blue-grey eyes and dark brown hair.

Thomas went to England in June where he was promoted to the rank of sergeant. While being reviewed by King George, his Majesty and the Earl of Lonsdale selected Thomas to be commissioned as a lieutenant. Upon examination, he received his command with the 11th Battalion Border Regiment. In November 1915, Thomas went to the trenches in France. He served on the Somme front in the Albert section.


During the early morning of 22 January 1916, the enemy was shelling the trenches. It is reported that Thomas heard the cries of the wounded and he left the trenches to go to their aid. Tragically, he was wounded when a shell struck him. That night Thomas died. Thomas is buried at Warloy-Baillon, Grave Reference C.6. 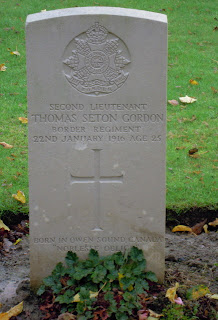 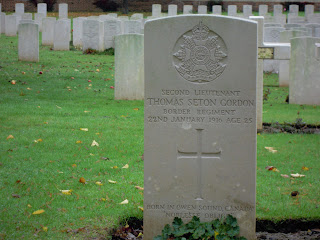 A full military memorial service was held at Knox Presbyterian Church (now United) Owen Sound to honour Thomas. His father, Thomas Gordon, town clerk, received a message of condolences from their Majesties.
The church was filled for the service. The Gordon family pew was draped in purple.

Thank you for posting this headstone and write up. These are my two great-uncles on my Dad's Father's side

Kathy, it has been my honour to research these two men. I have been fortunate to receive a copy of a photo of Thomas Seton Gordon but not one for his brother Charles. Do you know if one exists?

Kathy = if you see this reply, could you contact me by email? Another Gordon descendant (the one who gave me the photos) would like to contact you.