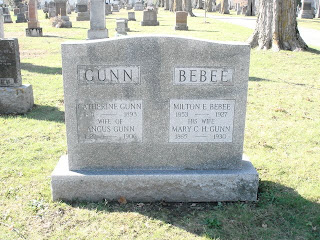 This tombstone is from Greenwood Cemetery Owen Sound

As with all research, what seems like it would be a straight search for information turns out to be slightly more complicated.

Catherine's death registration was found quickly on Ancestry. It gives her name as Catherine Angus Gunn. She was born in Scotland and was a farmer's wife.  The informant for her death was the Rev'd Alexander McLennan of Hoath Head. She died in Sydenham Township, Grey County 27 October 1893. [1]

In 1891 according to the census, Catherine, Angus and daughter Mary are living in Sydenham Township.

In 1901, Angus is shown in the census with his daughter Mary (listed as Minnie) and her husband Milton Bebee in Owen Sound.

Angus, according to his tombstone and the Greenwood Cemetery online database his year of death is 1906. The database gives the date of death as 13 August 1906 with the burial the following day. Despite trying many different searches, I did not find the death registration for Angus.

To confirm the connection between the Gunn family and Bebee family, I searched for a marriage registration for Milton and Mary. I found two registrations for them, two years apart with two different dates and places of marriages. Their ages increased appropriately by two years. Milton's parents didn't have common first names and in both registrations they are the same.His father was Steadman and his mother Tryphosa.

The first took place in Toronto on 5 July 1892. [4] The second took place 17 January 1894 in Sydenham Township. [5]  Each had different witnesses. As with all research, you end up with questions. Why were their two marriage registrations?

This is not my family.

Milton Bebee is first listed in the 1871 Census of St. Vincent Township along with his parents and siblings.

Stedaman Bebee and family appear in 1871 and 1881 Census for St. Vincent Township. Steadman (Gleadman) and wife appear in Meaford 1901 census.

Would like update of descendants of Steadman Bebee. Where did they migrate?

Thanks for sharing Milton Bebee and Catherine Gunn info.

Milton Bebee, his parents (Steadman and Tryphosia) and siblings first appear in St. Vincent Township in 1871.

Stedaman Bebee and family appear in 1871 and 1881 Census for St. Vincent Township. Steadman (Gleadman) and wife appear in Meaford 1901 census.

Would like update of descendants of Steadman Bebee. Where did they migrate?

Steadman was born in Hope Township in 1831.

Hi Ted
Thanks for leaving your comments. Perhaps, someone who knows this family will reply so that you can find out more about them.