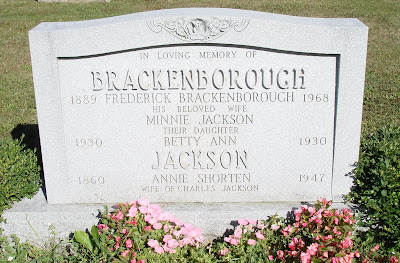 I found the marriage on Ancestry.ca but the image does not seem to match. It is of very poor quality so if this is a family of interest the microfilm should be looked at as it appears there should be another page with the full particulars.

According to the information on the index page, Frederick was born in Lincolnshire in about 1891. His parents were William Brackenborough and Fanny Hill.

Frederick married Minnie Jackson, born in London England about 1895. She was the daughter of Charles Jackson and Annie S. Shorten Jackson.  The marriage took place on 2 October 1916 in Grey County.
(MS 932 Reel 382)

Frederick enlisted in the army on 31 December 1915. He was residing in Feversham when he enlisted. His place of birth is given as Kirton Village, Lincolnshire and the date of birth as 20 November 1890.  Frederick was an electrician. His regimental number was 838471.

Also listed are a daughter, Betty Ann. A search for a death record found a child to Frederick and Minnie who was stillborn on 10 May 1931 but no entry for 1930.

Also on the monument is a listing for Frederick's mother-in-law.

Note in the information on Frederick in these few resources, we have several different years of birth

The Greenwood Cemetery database gives the following information
Frederick's death 8 June 1968.
Minnie's death  16 December 1971 [no dates for her on the tombstone]
Betty Ann's death 10 May 1931 [her last name is entered as Brackenboro]

I have no connection to this family.
Posted by Janet Iles at 3:49 PM

Thank you for your research. Frederick and Minnie Brackenborough were my grandparents. My father, aunt and uncle are on the other side of the stone. I did not now the name of my Frediricks mother (she died before my father was born). My father was Fredirck's only son, and I am his only son and I have 1 son. The continuation of the Brackenborough name in north america now rests on my son.

fyi: because of the names length, it was sometimes shortened to Brackenboro.

Hello Bob
I was pleased to add the research information. With this blog, I try to add some information about the people when I post the photographs of the monuments.

When the snow is gone in the spring, I will have to take another walk in the cemetery to photograph the other side.

Thanks for visiting my blog and leaving a comment.

Bob - if you could email me directly, I have received an email from someone writing the Brackenborough family history who would like to get in touch with you.

As you can see I now have a blog. Thanks for getting back to me and asking Bob to get in contact, I hope the snow soon clears so we can see whats on the other side of the Headstone.Which we think Frederick and Minnie were my Fathers Aunt & Uncle.