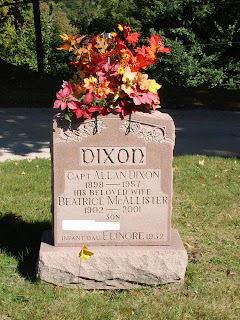 Allan Henry Dixon was born in Sydenham Township on 23 August 1898 to Leslie Dixon (a weaver) and Edith Bigg.

According to information in the tour booklet prepared by staff at the Owen Sound Marine Rail Museum, Allan went on the boats at age 1914 and by the age of 21 he had his captain's papers.

Allen Henry Dixon was employed on the Grey Beaver and the R. Bruce Angus.

Two of his border crossing cards can be found on Ancestry.ca. On 9 May 1941, he entered the United States at Rochester, New York with his occupation listed as seaman. On 13 June 1942, he arrived on board the SS Grey Beaver at Oswego, New York, with his occupation listed as mariner. On both occasions, it indicates that his fingerprints were taken. Was this because it was during the Second World War? He is listed as 6 foot 1 inch with medium complexion, light brown hair and grey eyes. His contact is his wife Beatrice Dixon who was living in Owen Sound.