In Greenwood Cemetery in Owen Sound, there is a stone that I photographed back in 2010 with the names Gunn and McKay on it. I do not remember if I photographed it for any special reason. Perhaps because of the surname Gunn. In 2010, I was working on my soldiers project and one of the soldiers that I was researching for the book was Alexander McKay Gunn. In an article over on Janet the Researcher, entitled Elizabeth Shown Mills - Fan Club concept, I talked about the multiple connections I was finding with the Gunn - McKay - McGregor families.

In that article, I talked about Alexander McKay Gunn who was born in Keppel Township on 13 January 1884 and was killed in the First World War. His mother, Johanna McKay was the  daughter of Alexander McKay and Betsy Gunn. His father, John Gunn, was the son of Donald Gunn and Elizabeth McDonald.

I am not sure of the family connection to those listed on this stone but it is interesting to note the Gunn and McKay names. 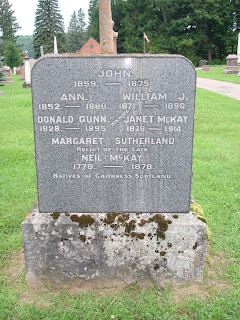 East side of the stone 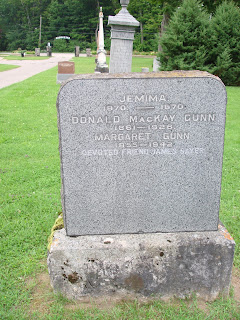 Thank you for posting this. It has helped me in my family history research into the McKay family.
Neil McKay (1770-1863) & Margaret Sutherland (1778-1878) were my great-great-great granparents. I visited the farm in Northern Scotland where Neil lived before he immigrated to Canada and I have identified his parents and siblings from Scottish records. Always interested in swapping geneological research on this branch of the McKay family.