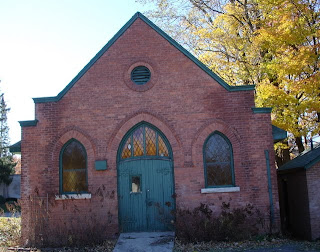 Mayor Mathew R. Duncan laid the cornerstone for the chapel in 1905. A year later, it was used for the first funeral. Until the mausoleum was constructed in 1930, the chapel was used during bad weather for the committal service and for storage during the winter. There were no burials in the winter. Inside there is a trap door in the middle of the building. It could be raised and the coffins placed on storage racks below until the spring.

From 1930 to the 1990s, this building was used as the cemetery office. It was to this building on  a cold March morning in 1990 that my mother, brother and I went to purchase three plots after my dad died. One plot was for my dad; one was later used for my mom and one will be for me.

Information on the chapel is from the historic plaque that stands beside this building.
Posted by Janet Iles at 9:20 AM