Among the monuments in the Markdale Cemetery is one that stands out because it is not what one might expect to find in a small town cemetery. 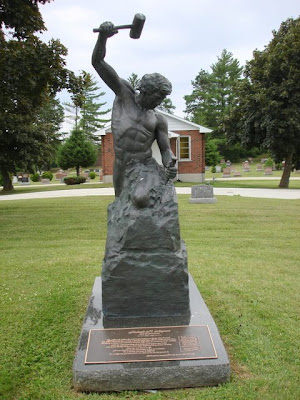 Is this sculpture a work of Bobbie Carlyle known as the Self Made Man? The self made man is carving himself - his character and his future, out of stone. 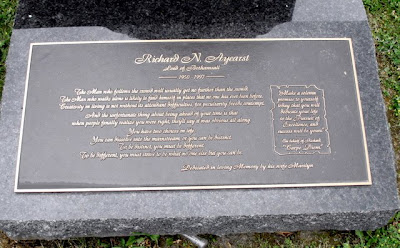 Who is Richard Ayearst - Lord of Bathamsall?  [March 4 2011 update. The name of the village is Bothamsall. Information provided by his widow.]

The first line of the poem is cited on different websites as the words of Alan Ashley-Pitt but I have not discovered who he is.


"The man who follows the crowd will usually get no further than the crowd. The man who walks alone is likely to find himself in places no one has." It appears to be from a work called "On Creativity".

Update: September 18, 2010, I received an email from a reader with this information on the name:


I know that the Ayearst's originally came from England into Canada, settling in the Toronto area. My Great Grandfather was William Albert Ayearst, my Grandfather was William Thomas Boyd Ayearst. William T.B. Ayearst had 2 brothers, John A. & Francis. There is a plaque on the west wall of the Nave at Canterbury Cathedral:  William Ayearst D.D., died May 9th, 1765 aged 81.


The family name began as Ayerst (possibly Aherst) in Kent and an "a" was inserted centuries ago. A book was compiled by Morley Ayearst, 1973, East Hampton, New York on the family history. Most of the U.S. Ayearst's are interred at Michigan Memorial Park Cemetery, Flat Rock, Mich.

This is my uncle's grave stone. He died in the Bahamas and he was a self-made man, an entreprenuer all his life he amassed a sizeable fortune enough to more or less retire to the island of eluethera at 40.

Thank you for sharing your information. His stone is quite remarkable.

Fastforward I have no way of contacting you.

I have received some information from a reader of the blog.

This is a interesting story
on a person that I never knew
but would have been related to.
John A. Ayearst was my Grand-
-father.He had three sons,Bruce
who was my father,Peter,Bill and
two daughters Helen and Barber.
They moved from Toronto to
Ottawa when my father was very
young.Also the inital A in my
grandfathers name was Albert and
my name is David Ayearst.

Thanks David for adding some more to the family story.

I worked for Rick from 1991 to 1996. He was an amazing individual with no bounds when it came to acheiving a goal. He was a motivator a teacher and I like to think that even though he was my boss, we were friends. I miss him and his wife Marylyn who also awas an ultimate optimist. I smile every time I think of Rick, a true Mountain Mover.

Thanks Angelo for paying tribute to Richard.