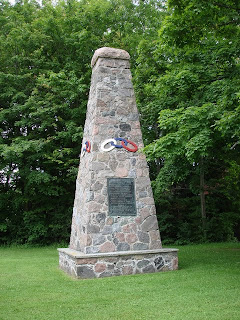 This tall cenotaph caught my eye one day while walking in Greenwood Cemetery, Owen Sound. I went closer to see the names inscribed on the plaque. 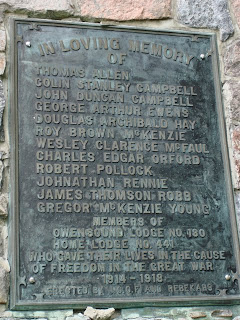 Several names caught my eye as two were men who I had been researching for several years.

If you look at the photo of the whole monument. Click on the photo to enlarge it. There are three rings.  These are the symbols for the Independent Order of Oddfellows: Friendship, Love and Truth. The IOOF and the Rebekas erected this monument after the First World War.

Until, I was looking at the support material for one of the oral histories at the Owen Sound & North Grey Union Public Library, I didn't know anything more about it. In 1977, Richard Neath was interviewed and one of the key subjects he talked about was the IOOF.

The support material was entitled "Lest We Forget". I haven't listened to the interview to know if the monument was talked about. After the end of the war, IOOF Lodges 180 and 441 formed a special committee to make recommendations for a suitable memorial.

Here I quote the article

. . . a square tapering monument, built with native field stone was decided upon. Volunteer help headed by Bro. Geo. Darby, P.G. dug the excavation for the case and other members spent afternoons and evenings gathering rocks and field stones which were hauled to the site on a truck donated by Bro. R. A. Breckenridge. Bro. C. H. Thompson was able to secure cement and the necessary aggregate for a nominal sum, to pour the base, which would require approximately 24 cubic yards of concrete. This was all done by members of the order and resulted in a lot of sore muscles and some blisters as machinery for mixing concrete in those days has long been outdated. The building of the monument was placed in [the] hands of a local stone mason by the name of Mr. Wm. Malcolm, who was without a doubt a master craftsman, especially with field stone. A recess was left on the West side of the monument to place a suitable bronze tablet on which the names of the members of the order who gave their lives during world war one was cast. [1]

Unfortunately, no date of dedication is given.

Hi Janet - Just to let you know that I have passed the "Ancestor Approved Award" on to you. Great site! You can pick the Award up at my blog - http://thevintagevignettes.blogspot.com/