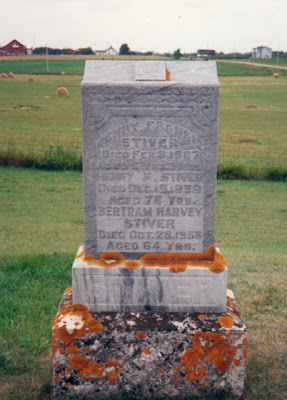 Henry Frankie Stiver was born 4 July 1901. His birth was registered in Collingwood, Simcoe Ontario. His parents were Henry Stiver and Abbie Smith. It gives the residence of the father as Collingwood and working as a labourer. [1]

Frankie died in Toronto on 8 February 1907 from septic peritonitis. His residence is given as Dundalk. [in Grey County]. It is interesting to note that Dundalk is given in the death registration as the place of birth. [2]

Henry F Stiver is the father. He was born about 1863 in Markham, Ontario. He was the son of Edward Stiver and Rosanna Elizabeth Dickson.

Bertram Harvey Stiver is another son of Henry. He was born in Osprey Township on 31 May 1891 to Henry Francis Stiver and Abbie Olga Smith. [3]