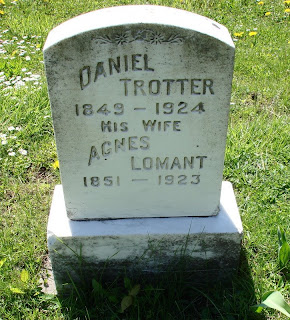 I noticed this stone during my walk in Greenwood Cemetery, Owen Sound. It is without ornamentation but it shows that they died within a year of each other. Also an added bonus is her maiden name. Read on and see what I discovered when I went searching for more information.

Daniel Trotter's death registration indicates that he was born in Bognor (Sydenham Township), son of James Trotter and Jane McArthur. He died 1 November 1924 and was buried on 4 November 1924 in Greenwood Cemetery, Owen Sound. He was living in Owen Sound at the time of his death. [1]

Agnes Stark Trotter's death registration indicates that she was born in Sydenham Township, daughter of Daniel Lamont and Mary Thompson. She died 30 August 1923 and was buried on 1 September 1923 in Greenwood Cemetery, Owen Sound. She was living in Owen Sound at the time of her death. [2]

A search for their marriage resulted in finding, a marriage between Daniel Trotter and Agnes Lemon on 25 January 1878 in Owen Sound. He is listed as the son of James and Jane Trotter. She is listed as the daughter of Daniel and Mary Lemon. [3]

Now we have three different spellings of the surname of Agnes. The monument is written LOMANT; her death registration as Lamont (looks very much an a instead of an o) and her marriage registration gives her surname as Lemon. Interesting. That means some more research when time permits.

What is Agnes' maiden name?

I am not related to this family.